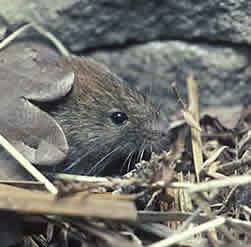 Native; first recorded in the county in 1863 when six specimens were obtained at Calke. Widespread and rather thinly scattered distribution across the county, but believed to be under-recorded. Bank Voles are common in woodland, scrub and other habitats that provide adequate cover such as larger gardens. They may use garden walls and drystone walls as cover or for nesting. They tend to be uncommon on the northern moors and certainly are less frequent in this habitat than the field vole commonly caught when small mammal trapping

[Old local name: fox mouse, presumably from the red-brown colour of the fur]