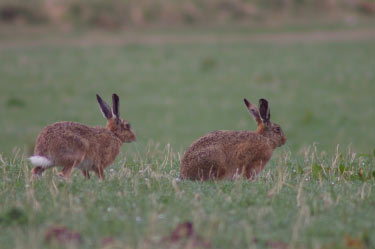 Introduced to the UK, perhaps during the Iron Age. Distributed widely, though rather unevenly, throughout the county, in farmland, pastures, and open woodland, avoiding denser areas of trees. Rarely seen in urban areas. They also generally avoid heather moorland though they are occasionally seen in that habitat and do occur on moorland margins and in upland grassland.

Within the county, Brown Hares seem to be most common in the White Peak and NE Derbyshire. Locally the population seems stable, except in south Derbyshire where some observers have noted a decline over the last 10-15 years. Brown hares have declined nationally and they are listed as a priority species under the UK Biodiversity Action Plan.