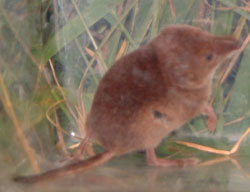 Native. Widespread and common, occurring in virtually all habitats that provide sufficient cover. It is probably very under-recorded. It has been recorded up to at least 585m (1919 feet) on Bleaklow but is generally less frequent on moorlands and blanket bog than the Pygmy Shrew, although much more common than the Pygmy Shrew in most habitats. The population is presumed to be stable. Common shrews are invariably caught in Longworth traps. They are rarely seen, except when live trapping, though the high-pitched squeaks are heard more often. Dead shrews may be brought in by cats or found killed by other predators, but not eaten because of their unpleasant taste. Two white specimens were obtained at Calke and one at Swarkestone in 1912. [Old local name: fetid shrew].