Coypu Myocastor coypus
STATUS : Widespread and common in a range of habitats. 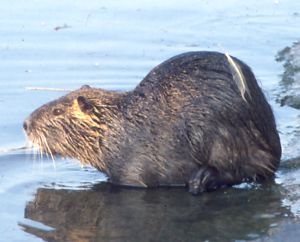 Introduced. Native to South America and imported to Britain for fur farming from 1929-onwards, to southern England and East Anglia. A large feral population became established in East Anglia but was eradicated by a government campaign by 1989. There was apparently a local introduction at Treeton Dyke but details are unknown. Locally, a dead coypu was found by Roy Frost at Ogston Reservoir in April 1964 and presumably came from a small population introduced nearby at Treeton Dyke. Lever (1977) mentions other Derbyshire records for 1961. According to Harris and Yalden (2008), an isolated individual was found at Castleton during the eradication campaign between 1970 and 1989, but no further details of this report are available.