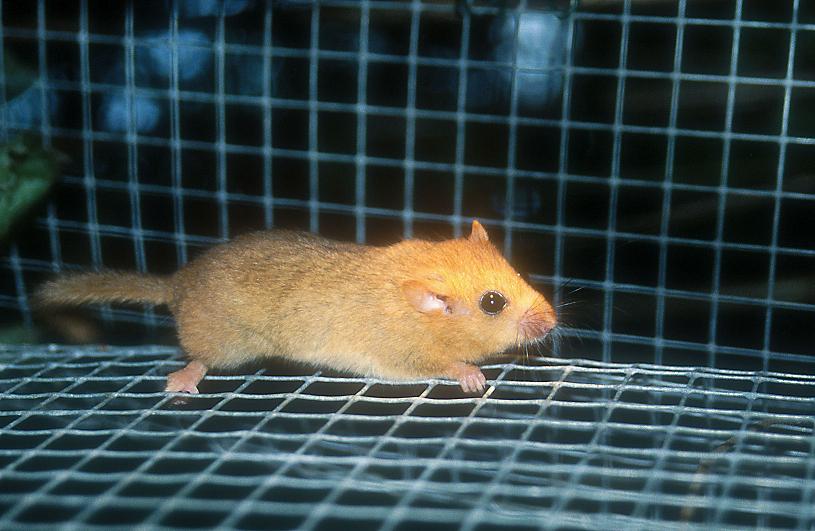 Native. Declined nationally during the 19th century and died out in Derbyshire some time early in the 20th century. Recently reintroduced to two sites as part of a national programme.

There are few available details of the former status of dormice in Derbyshire. Most of the sparse information available is provided in the Victoria County History (Jourdain 1905). This quotes an 1862 source as saying the dormouse was ‘formerly abundant, especially in large woods of south Derbyshire but becoming annually more rare’. The VCH author says said that at the time of writing (1905), it “…appears to have been tolerably numerous in former times, at the present day it is exceedingly local and scarce except in one or two places”. Jourdain listed Lea Valley, Alderwasley, High Tor woods and Lea Wood, Derwent, as localities where it still occurred and cited a 19th century report from Stubbins Wood near Chesterfield. There is also an 1890 record from the Goyt Valley above Whaley Bridge.

There have been no confirmed records since then. A dubious record from Elvaston in July 1965 (Middleton 1969) has not been validated, nor have more recent anecdotal reports of dormouse nests in the Sudbury and Swadlincote areas. No evidence of dormouse presence in the county was found on the two Great Nut Hunts (national dormouse surveys) of 1993 and 2002. Small populations could conceivably survive in the south but given the amount of survey effort to date, their existence is unlikely. The nearest native Dormouse population is located in west-central Staffordshire, with others somewhat farther away in Shropshire, North Wales, and south Cumbria.

Dormice were reintroduced to a site in the Middle Derwent Valley in 2003 and one on the Chatsworth Estate in 2005 by the People’s Trust for Endangered Species (PTES), as part of English Nature’s Species Recovery Programme. Similar reintroductions have taken place in the Staffordshire sector of the Peak District, not far from the county border (2002), Cheshire (1997), north Nottinghamshire (2000), and Yorkshire (two sites; 2002 and 204). Derbyshire Mammal Group assisted with both local reintroductions and monitors both sites. Breeding has occurred at the mid-Derwent site, but numbers there have slowly dwindled, and none were found in 2007 or 2008 so it is possible that they have died out or moved away. A dormouse nest was found in a bird nestbox at a nearby DWT Reserve in 2007 and dormouse tubes were placed there but no further dormouse signs have been found. At the Chatsworth site, new-born young were found in September 2005 and breeding has been confirmed in many of the years since, including 2013, when some late litters were found in the autumn. In 2016 three adults were found. In addition to annual nestbox checks, two other monitoring techniques are used: the traditional search for hazelnuts opened in a diagnostic way by dormice, and provision of small feeding cages, specially designed by the first site owner which cannot be accessed by grey squirrels. These are provided with biscuits and apple and use by dormice is shown by the presence of characteristic droppings and feeding signs. This has proved a more time-efficient method than nestbox checks and does not require a dormouse licence.

Numbers have fluctuated; one year 47 were found including 2 families with a female and 5 young in the same box. Dormice typically make round nests consisting of a neatly woven central section with a small cavity the whole surrounded by fresh leaves – usually hazel. These are quite distinct from nests made by wood mice which tend to be an untidy jumble of leaves, lacking the woven central section.

Sometimes dormice have been found locally in a jumble of moss, perhaps a taken-over wren’s nest or in a much looser structure on top of, or beneath, a blue tit nest. At Chatsworth there is a complete absence of honeysuckle, from whose bark the woven section is traditionally said to be made. Instead, the woven section here consists of grass of varying types, which suggests that the dormice are coming down to the ground more often than is sometimes thought.

Dormice are protected under the Wildlife & Countryside Act, which makes it illegal to disturb, harm or handle them without a licence.

More on this project