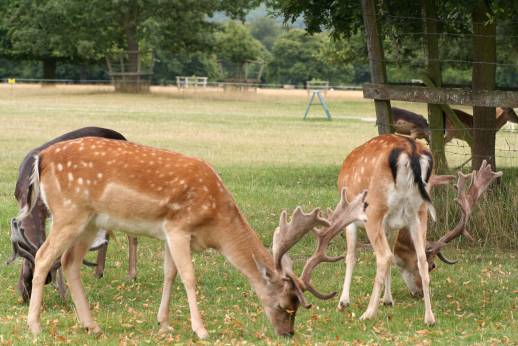 Introduced by the Normans for the chase. Current occurrence in the county is based on escapes from deer parks. There are very few details of the early history of the species in the county. In the early 14th century, 54 deer parks were known in Derbyshire, owned by monasteries or private individuals. The Royal Forest of Duffield Frith was one of the most notable sites. By 1817 deer parks had been reduced to 13: Alderwasley, Alfreton, Bretby, Calke, Chatsworth, Drakelow, Hardwick, Kedleston, Locko, Norton, Sudbury, Stanton, Sutton, and Wingerworth (though it is unclear whether they all contained fallow deer).

Further introductions to Great Britain took place later, including some dark-coloured or black animals from Norway for James I. Interestingly, Glover (1829) referred to two varieties of fallow deer in Derbyshire, one of which he described as ‘the beautiful spotted variety from Bengal’. This is a different species, chital Axis axis, which shares a similar spotted coat to fallow deer, but possesses rounded, rather than palmate antlers. As none of the standard textbooks on mammals in UK refers to introductions of this species, it is not clear whether Glover was mistaken, or was referring to captive animals.

Escapes appear to have been established for some time. Glover also said that fallow deer was the only extant species of deer in Derbyshire. There are currently three main wild (or feral) populations: in south Derbyshire, mid Derwent valley, and Morley. The most widely-distributed and most numerous population is found in and around Calke, South Wood, Ticknall and Melbourne. A census in early 2004 by Bill Cove, NT chief warden at Calke, using thermal imaging equipment, revealed a population of 81 in the Calke-Robin Wood-Spring Wood area. Numbers here are expected to increase with the expansion of the National Forest and establishment of new plantations.

A second population has been established in the Clough Wood -Birchover-Darley Dale area since the 1920s, probably from escapes from the deer kept at Stanton Park. This population has shown limited expansion perhaps due to culling or poaching (Yalden 2001). Smaller numbers of fallow deer are seen regularly in the Morley Frith area. In addition, occasional strays from the Dukeries may reach north-east Derbyshire and vagrants wander quite widely, particularly in the south of the county.

Fallow deer in Derbyshire are mainly found in woodland habitats, from ancient deciduous woodland, mixed woodland and coniferous plantations but ???? also graze in adjacent fields and rough pasture. An unusual record occurred in January 2008 when a dead fallow buck was found 350m west of the Derbyshire boundary on open moorland at Danebower, at an altitude of 400m.

Park herds are still present at three sites - the National Trust owned Calke Park, Chatsworth (where numbers exceed 250) as well as the Chestnut Centre near Chapel-en-le-Frith where a small herd (30-35) has recently been established. Private herds are kept at Stanton Park and a site near Holloway. Park herds, and so potential sources of escapes or colonisers, are also maintained just outside the county at Lyme Park in the north-west Peak District and Donington Park on the Leicestershire-Derbyshire border.