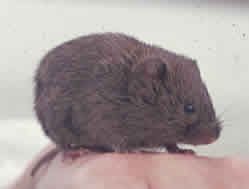 Common and widespread in rough grassland as well as wetland margins. Numbers are reduced by grazing pressures, especially in moorland and should benefit from agri-environment schemes. Numbers seem to fluctuate on a 4-year cycle, but are stable if allowed for this. They are less often caught in Longworth traps when live trapping small mammals, but are a frequent constituent of owl pellets. Field voles form a major prey item of four species of owl, kestrels, stoats, weasels and foxes. When numbers peak they support increased numbers of owls - for example several short-eared owls present on Leash Fen in November-December 2008 were believed to be attracted by a vole ‘peak’.

Runways, latrines and feeding signs are commonly found among tussocks in rough grassland and purple moor grass (Molinia) and rushes on the moors. In damp areas and along streamsides these field signs could be confused with those of the Water Vole. However, though field vole droppings are similar in shape to those of water vole, they are usually greenish and notably smaller, only 5-7mm long, and usually found in piles. Some feeding signs, such as stripped lengths of soft rush (Juncus effusus) are also similar to those of the Water Vole. Field voles construct loose nests at the base of grass tussocks from grass and leaves. They are much less neatly woven than Harvest Mouse nests and are not woven into the grass stems. Water Voles also construct above-ground nests occasionally.