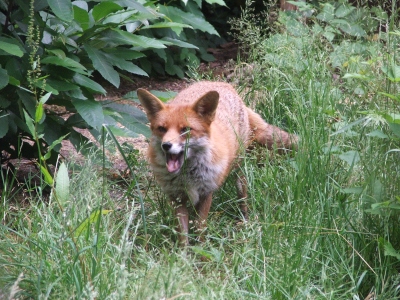 Native. Widespread and generally common throughout Derbyshire and found in all virtually all habitats. Pilkington 1789 Glover (1829) said they were present in every part of the county, and greatest numbers were found at Bradley and Shirley, near Ashbourne. Common in some urban areas, including parts of Derby, and also known in Chesterfield and Glossop. Foxes manage to survive on northern grouse moors despite being heavily controlled, though they are very rarely seen there: their presence is confirmed by tracks and scats. Foxes are also shot and snared in many places gamekeepers, pheasant rearers and farmers, because of the damage they do to grouse and pheasant rearing interests, chickens and ducks.

At Calke in the early 1900s, foxes with white pads seen and one individual with its coat densely covered with white spots (‘as if caught in a snowstorm’) was seen on 16 October 1915.

There is a national website about the fox, The Fox Site